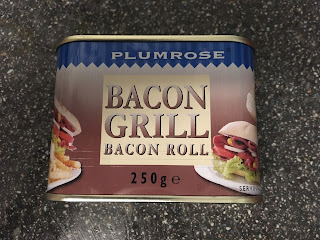 I'm not one to frequent the tinned meat aisle, because the term "tinned meat" makes me feel slightly dead inside. But I gazing upon the canned goods in B&M, I figured I'd search for the most horrible looking offering and plunge into it head first. Not that I could do that, because my head wouldn't fit in the tin. So here we have some bacon grill, or is it bacon roll? The pictures show it in a roll, so is it a bacon grill designed to help you emulate a bacon roll? The answer to these mysteries obviously lay within. 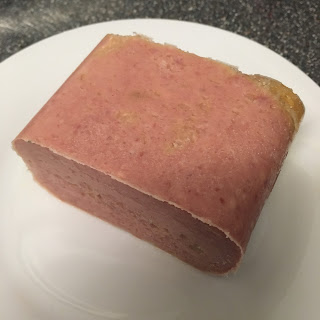 Ah, the answer is it's a non-descript block of "meat" that doesn't seem fit for anything. I know I wasn't expecting anything from this, but I still ended up disappointed. As you may have surmised, this doesn't taste like bacon. In fact, it doesn't taste like much at all, there's a faint hint of something Spam-like, but really it's just a block of chewy, slightly meaty stuff. I expected to be disgusted by the flavour, but this is just especially bland. So if you're after a flavourless, processed lump of foodstuff, by all means hunt this down. I won't be cracking open another can of meat for a while though.