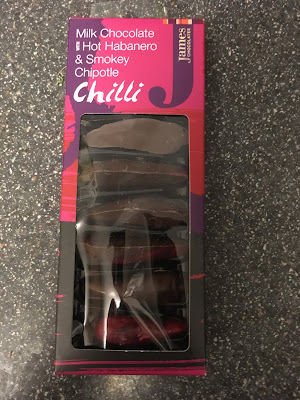 I think it's become clear to those that know me that I'm quite the spice fiend, as I received a pretty nice selection of chilli themed gifts this Christmas. Here are some chocolates infused with both habanero and chipotle, so I was expecting a fair bit of heat, maybe so much as to compromise the flavour.

You can choose between your chillies, which is quite good, and the difference between them is pretty noticeable. Each one has a nice base of creamy milk chocolate, it's of fairly good quality, and thankfully neither chilli takes it over that much. The habanero is actually pretty intense, a heat that builds up fast and lasts for quite a while after eating. The chocolate tones take the edge off, but this isn't one for the faint hearted. The chipotle is not as fiery, but it does provide a decent spice level. The smokiness doesn't transfer over all that much, so it's not perfect, but it's a better chocolate for those who don't want their head blown off. All in all this is a pretty decent duo of chilli chocolates. Good for those who want some spice, but not too much.