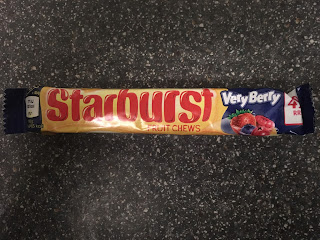 I eat my sweets in colour preference order, I'm sure I'm not alone. It invariably goes green, yellow, orange, and then some combination of the purple/red/whatever. The point I'm trying to make is that the berry flavours are my favourite, and I always jump for joy a little when they bring out dedicated bags of just red/black/purple sweets. That's why I was so drawn to this pack of Starburst, which boasted flavour only based on berries. Also, there's blueberry in there! What could go wrong?

This pack consists of four flavours of Starburst. There's the classic strawberry, and the new additions of raspberry, cranberry and blueberry. The strawberry, of course, is good, it's been perfected over many years, you can't fault it. The others, I must say, were a slight disappointment. The cranberry is inoffensive, it's got a certain fruitiness to it, but it's fairly bland. Not bad. The raspberry starts out as a fantastic burst of juicy goodness, but it does become a little sickly after a few chews. Still, it's a fairly faithful rendition for the first part. I saved the blueberry for last, expecting to be blown away, but I have to say it seems a little wrong. Maybe it was just me, but it tastes more like a combination of blueberry and liquorice than just fruit, it's a fairly dark taste with not too much sweetness. Hanging around in the after taste is a certain blueberry flavour, but it's not particularly great. This is an odd pack of Starburst, it had so much potential to be great, and some amount of good flavouring in there. But overall these just aren't all that. Nice enough, but they don't beat the original flavour selection.