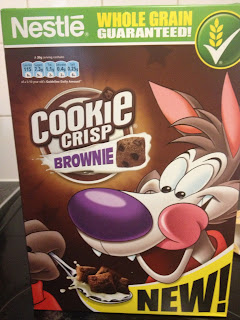 A few years ago Cookie Crisp landed in the UK, most likely to a cacophonous uproar from parents nationwide. I say most likely because I don't remember hearing such an uproar. Although I wasn't quite a child, I was too busy thinking about how awesome it would be to eat cookies for breakfast, and awesome it was. Cookie Crisp is basically tiny little chocolate chip cookies that you can drown in milk and label as part of a nutritious breakfast, and they actually taste pretty good after a good night's sleep. Now Nestlé have decided to not only give us cookies for breakfast, but to make them brownie cookies too. What's not to love? 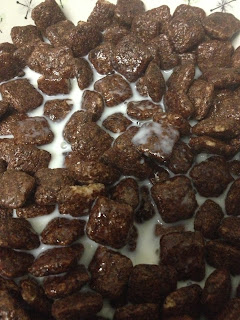 Well... they don't look quite right. I mean, they certainly look like chocolatey cereal, but they're not cookie shaped like their older brother. These are smaller, and square, overall much more cereal like. Looks aren't everything though, so I delved in and started to crunch my way through them. But something was amiss. Sure, this cereal tastes like chocolate, and it's pretty nice too, but that's all it really tastes like, chocolate cereal. The pieces are small, and quite hollow, not nearly as substantial as original Cookie Crisp. There are chocolate chips contained in the pieces, but they're not really noticeable while chomping. I could also detect no hint of brownie flavour.

So overall, these were not what I was expecting. These are less Cookie Crisp, more Coco Rocks or other generic puffy-ish chocolate cereal. They are nice, and they turn the milk chocolatey pretty damn fast, but they just don't seem to deliver on their promise. However, my kids devoured their bowls within about a minute, so these are probably a great purchase for children.