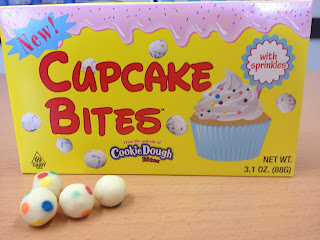 Apparently I have not reviewed either Cookie Dough Bites, or Peanut Butter Cookie Dough Bites, despite having devoured both on separate occasions. They are tiny, sugary balls of doughy goodness, promising you that gooey, uncooked cookie taste, and almost delivering it, but both were just a little too sickly for me. But that won't stop me trying some new varieties, and after seeing Grocery Gems review these Cupcake Bites yesterday my interest was piqued. Thankfully, I walked into my local Mr. Simms today and found them sitting on the shelf for an affordable £2.49.

The blurbs on the box promise little morsels with cupcake centres, surrounded with frosting, and sprinkles thrown in for good measure. Well, they certainly are what they say on the box, especially the sprinkles. While they're certainly not in hundreds and thousands territory, the sprinkles are colourful, crunchy sugar pieces, embedded in the coating, and most of the time forming some kind of funny face:

So yes, the sprinkles are nice, and the frosting isn't too bad. It's certainly sugary and sickly, but the problem lies in the fact that there's just too much of it compared to the cupcake dough. When you eat a regular cupcake it isn't a tiny sphere of cake surrounded in a planetary mantle of frosting, but that's what they're selling us here. Perhaps it's for the best though, because the dough isn't really that nice. It's only slightly cakey, and quite gritty due to all the lovely sugar. But, with the frosting and sprinkles thrown in, it's not too bad of an experience. I think I prefer the regular cookie dough bites though, there's a little too much sweetness going on here that overwhelms the tastebuds quite quickly.