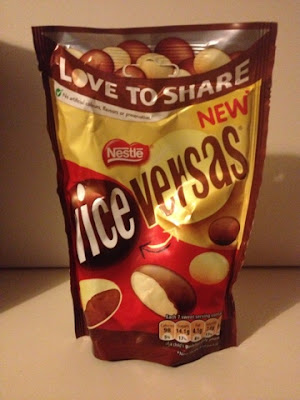 But now they are back, but apparently they're new. Well, they're certainly fatter than they were before, in their Minstrel like form. But hey, bigger is better, right? Well, not really. The milk chocolate contained within the white sweets is not very nice. It's odd, because Nestlé also make Smarties, which taste much nicer, and Aero, which is fantastic. But this milk chocolate just tastes like those cheap chocolate Santas/Easter Bunnies you find on cheap seasonal shelves. Perhaps all Nestlé's chocolate is like this, but it's more manageable in smaller/more aerated doses.

The white chocolate is certainly nice though, I don't think you can really go wrong with white chocolate. But because the shells of these sweets are so large, they ended up overpowering the chocolate innards a lot of the time, what with their sharp broken edges, and the sugar starting to come off, giving me a rough feeling on the tongue. These Vice Versas are certainly not as nice as I remember, I think I'll stick with the Minstrels.