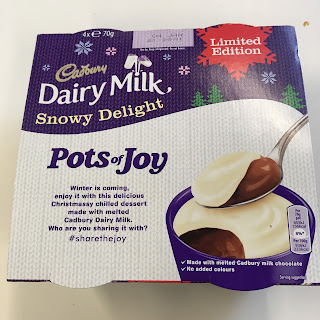 I may have made my way through a lot of festive treats over the last couple of months, but this one had eluded me until the week before Christmas. Mostly because they were really expensive, and now you can pick a four pack up for £1 in Tesco. But these are another seasonal edition of the Pots Of Joy, this time getting into the festive spirit by adding some white chocolate on top, because it looks like snow, innit. There's not much more to say than that, it's a melted Dairy Milk dessert with melted white chocolate on top.

Sure, these don't sound particularly interesting from the way I just described them, but they're pretty good. Simple but effective, I guess. The chocolate part is very nice, pretty much melted, slightly creamier Dairy Milk. Say what you will about the quality of Dairy Milk chocolate nowadays, but melted down into dessert form it still taste pretty nice. The white chocolate adds another extra creamy layer on top, it's not the best quality, as I already knew from Cadbury's previous white chocolate ventures, but it all works pretty nicely together, giving a nice, slightly lighter flavour that just a regular Dairy Milk Pot Of Joy. A simple idea for a limited edition, but it's pulled off pretty well.