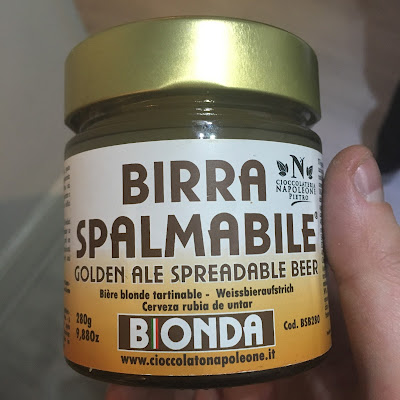 It's another day where I've stumbled in close to midnight, and have neglected to post a review for the day. Thankfully, I've returned home prepared, as I was offered a taste of this spreadable beer that I happened across at a party. I'm not sure exactly how else to describe it really, it's beer that you can spread on things. Well, beer in spread form anyway, so let's see how close to the real thing this is.

I could do a really in-depth review of this, spreading it on different foods to see what it pairs well with, delving into the ingredients to see what makes it what it is. But for one thing, I don't have the time today, and for another, I think I got the information I needed from just trying a little bit on a teaspoon. It's spread, and it tastes like beer. It's pretty much like beer flavoured honey actually, it's not a bad taste, but it is a little overly sweet, which kind of detracts from the bitterness of the beer itself. But hey, it's not too bad, it's a unique flavour, and I defintiely got a beer-like hint from it. If it were simply beer flavoured I probably wouldn't want to spread it on my toast (or bagel, or whatever). But this stuff seems like it would be alright for a change. Not a fantastic spread, but it's something different.