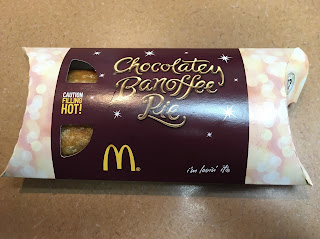 Alongside the festive menu at McDonald's is also a festive pie. Gone is the mince and custard of last year, now it's time for banoffee and chocolate, which is much less seasonal in my eyes. But what do I know, I'm not the billion dollar corporation. So yes, this is like the classic apple pie, but instead of apple in the middle, it's got both a banoffee sauce and a chocolate sauce. You could probably guess that, but now I've made it clear.

The banoffee bit isn't all that fantastic. It's more banana than anything, there's a hint of toffee in there, but mostly it's overly sweet. The chocolate sauce lends a hand here, providing a smooth, slightly darker flavour that mellows the whole thing out. It's not the best quality sauce, I guess the clue's in the fact that it's "chocolatey" and not just "chocolate". It does a decent enough job up against the sickly banoffee part, but it makes for a pretty average filling overall. As for the pie part, it's the same you'd find in any McDonald's pie. A greasy, crispy batter that is strangely alluring, but at the same time leaves you feeling disgusting and unhealthy. That's the McDonald's way. But anyway, this pie is alright, nothing special. It doesn't beat the apple, so lets' get Christmas out of the way so we can get back to that.