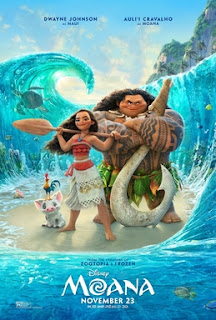 Two Disney features in one year, we haven't been this lucky since we got two Pixar features... last year. Anyway, this is Moana, following on from the quite wonderful Zootropolis that released at the beginning of the year. It follows the titular Moana (Auli'i Cravalho) as she leaves the safe haven of her home island and journeys across the ocean to fulfil a mystical quest in order to stop darkness from spreading throughout the world. On the way she enlists the help of demigod Maui (Dwayne Johnson), who has fallen from grace. They must work together to navigate the seas and face the dangers that await them.

This isn't your traditional Disney princess movie, but Moana does fit into that role. Longing for adventure, defying those who wish to keep her sheltered to truly discover herself, and her father is a chief, of course. There's no prince, which is a nice change, and the mythological elements are presented in quite a neat way. I can't help but feel the plot is a little too linear though. The set up for the journey is quite drawn out, and by the time it gets underway it's like a laundry list of "go here, do this, save the day", and barely deviates from that. There is a good offering of characters to help it along though. Cravalho is fantastic as Moana, putting in a fantastic performance for a 16 year old in her first role. Dwayne Johnson is, well, Dwayne Johnson, not Oscar worthy by any means, but he puts in a decent effort. Jemaine Clement is a pretty nice addition, it's always a pleasure when he turns up, but even he can't make this movie truly great. So let's segue into my next criticism.

The songs. The songs are not good. Even when Jemaine is singing one. We all know Disney can pump out some timeless classics based on their songs, and in recent years we also know they can produce some truly great stuff with no one singing a word (Wreck It Ralph, Big Hero 6). So Moana has songs, but they're just not good. I don't know what happened, but the lyrics are all over the place, the melodies aren't particularly memorable. After watching Frozen I was looking up the songs on YouTube for days after because I couldn't get them out of my head. After Moana I was looking them up just to remember what they were. The main ballad (How Far I'll Go) is a decent enough offering I suppose, but there's a song at the beginning about coconuts that's just awful, and The Rock pelting out a ditty is something I'd rather not hear again.

So yeah, it all evens out to a pretty average offering. Moana isn't an awful movie by any stretch of the imagination, but it's just so bland. It looks amazing, and it has a few great elements sprinkled here and there, but looking at it as a whole it just sort of trundles along. If it were not for my compulsive need to collect every Disney feature, I don't even know if I'd pick it up on Blu-Ray. Sorry Disney, try harder next time.