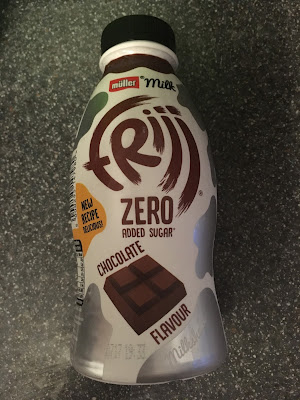 I've been avoiding this one for a while, I was pretty sure there'd be very little in the way of redeeming qualities for a no added sugar milkshake. But I finally took the plunge since they're 50p at the moment in Tesco. Yes, a no added sugar shake, which is pretty impressive, seeing as sugar is the second main ingredient in Frijj. Now in its place there are sweeteners, and for that sacrifice you get an astounding 19 less calories per 100ml. Doesn't sound like a great trade to me, but I guess I had to see how it tasted before I passed judgement.

Sugar does make a difference you know. I know it's bad for you, but it's also bloody delicious. That's what this shake is lacking, that certain sugary niceness, and although it's noticeable, I have to say it's not awful. Of course there's still the cocoa and buttermilk powder to help it along, but that lack of extra sugar makes it taste quite thinned out and watery. It's a pretty decent attempt at a no added sugar shake, and the chocolate flavour still holds up, but the change in flavour isn't quite worth the meagre saving in calories. A very average milkshake.