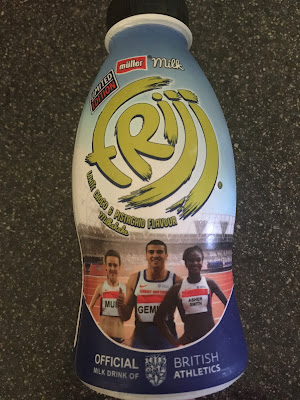 Frijj have churned out some pretty unique flavours in the last couple of years, and this one is no exception. Here we have a white chocolate & pistachio shake, the very mention of which was enough to get me out hunting, because I love me some pistachio. I believe it's also the first time I've tried a white chocolate Frijj as well, so there's a double whammy here.

Let's start off with the white chocolate, I have to say it's a fairly decent attempt. It's smooth and creamy, as you would expect from Frijj, and it's got a pretty good flavour to it, light and chocolatey. The pistachio, however, is a little disappointing. There's a certain hint of nuttiness throughout, but it's not particularly strong, the chocolate overwhelms it a lot of the time. It's a nice flavour to have there, pretty sweet, and blending nicely with the chocolate, but the balance is just a bit off. I was really looking forward to this shake, and while I liked it, it didn't blow me away. Looks like it's only around for a little while though, so if you're interested grab it while you can.