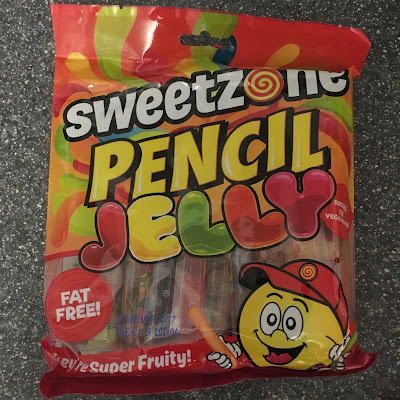 It's time for another curiosity I picked up from the world food aisle in Asda. Here we have Pencil Jelly, which is jelly in pencil form. It's basically a cross between a jelly pot and a Frube, and these comes in an interesting variety of flavours, including blueberry, pineapple and lychee, alongside your regular strawberry and apple.

They're all wrapped up in a convenient tube, although accessing the stuff isn't particularly convenient. I tried ripping a small hole with my hands, but was met with a splash of un-set jelly stuff, and squeezing the stuff out was a bit of a pain, I feared the tube would burst at any moment. So I went for the scissors, and snipping the top off still yielded that liquid squirt, but it did facilitate getting the jelly out in one long, wobbly pencil. As for the flavours, they're alright. They taste fairly fruity, and some quite like the fruits they're emulating, but I wouldn't say they're much to write home about. The more exotic flavours are pulled off quite well, and I'd say that's a selling point for this pack, but don't break your neck fervently seeking these out.