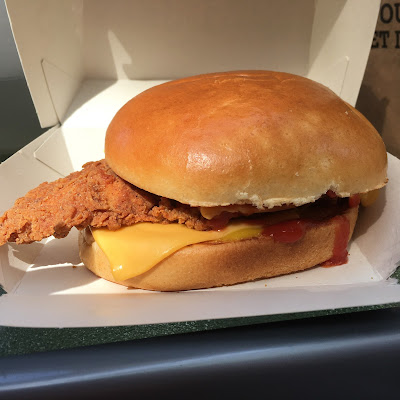 It's time for another KFC promo burger, this one also around for just two weeks, on the heels of the Texas Ranch. Here we have the Alabama Cheese, which consists of a brioche bun, chicken fillet, two slices of cheese, kethcup, pickles and mustard. I don't remember having mustard in a KFC burger before, so this showed some promise.

Unfortunately I can't rate this one too highly. It's a pretty bland burger, especially coming off the last burger that had that classic hash brown to make it into more of a tower. The pull here is in the double cheese, which is nice to have, sure, but it doesn't do too much for the flavour. The ketchup is good enough, but the mustard, while possessing that nice mellow American flavour, isn't plentiful enough to really stand out. Also, as far as I could tell, there were no pickles in my burger, I didn't realise they were meant to be in there until I just read the description to type up for this review. It's a shame, I think the pickles would have elevated it into something pretty decent, but I couldn't help but feel disappointed with this flat, sauce-ridden burger. Let's hope the next one's better.