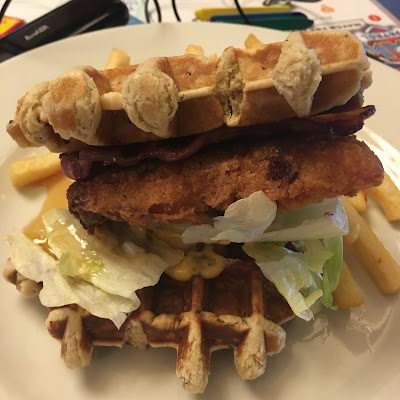 Another burger review, I'll turn into a burger at this rate. But anyway, here's another unique burger from the Hungry Horse summer menu, after the interesting (and disappointing) experience of the pizza burger from the other day. This one also forgoes buns, instead opting for waffles, for that all American experience I suppose? I've had chicken and waffles before, and it can be a pretty great combination. This burger features a southern fried chicken breast, lettuce, bacon, burger sauce and maple syrup, sandwiched between two savoury waffles.

I was expecting great things from this, and while it was definitely something different, it's probably not something I'd try again. The chicken was pretty good, as was the bacon, but the burger sauce and maple syrup combination was a little odd. I got used to it after a while, and must admit it wasn't too bad, but it's not a pairing I'd have on a daily basis. Unfortunately, the waffles pose the biggest problem here, they're just really dry, they were literally crumbling as I made my way through the burger, and apparently "savoury" in this case means "devoid of flavour". A sweet waffled would have been better, but I guess anything would have been better really. This burger had promise, but failed to deliver again. By all means try it out for a unique experience, but don't expect it to be a good one.