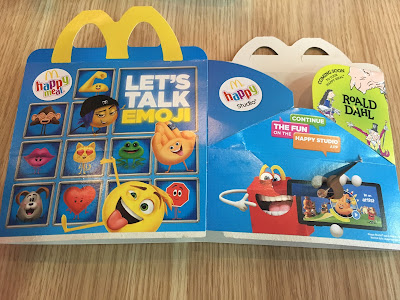 Now The Emoji Movie is on general release, everyone can experience the soulless cash grab for themselves. But it doesn't end there, because now you can head to McDonald's to pick up the latest Happy Meal toys based on the movie, accompanied by this Emoji Movie-themed box. I often have a look over the kids' Happy Meal boxes while they're eating, and there are normally a few fun activities to complete, or something nice to look at. Not this time though. 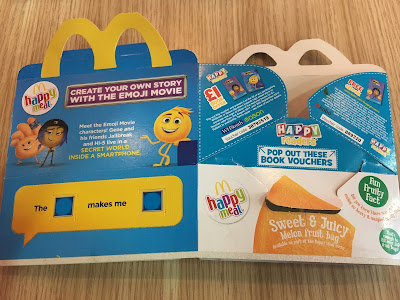 Did you know Happy Meal boxes come with a handy tab you can rip off to turn the base into a tray? It's pretty nifty, but has been around for long before this iteration of the box, so that's not a saving grace here. So there you can see the four sides of this box, half of which barely have anything to do with The Emoji Movie. Poor show. As for the other two sides, one just has a series of pictures of Emojis, and the other has a push out speech bubble. This is what constitutes the only activity on the box. You see, that handy tab contains two rows of Emojis that you can lot into that bubble, like so: 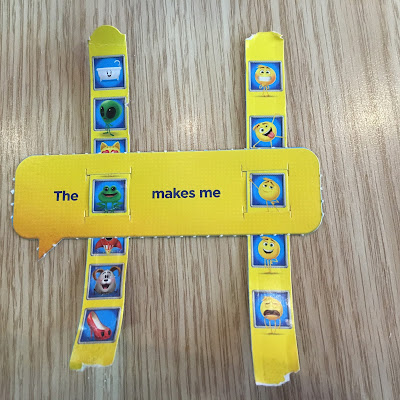 Now you can express yourself in a variety of ways, as long as you have one of five specific opinions about seven specific items. As you can see here, I have decided that frogs make me, uh, ready to dance? It's not particularly clear, and the selection of Emojis is meagre, so I can't see how this would keep anyone interested for more than a minute. It's the only thing to do on the box as well, so it's a pretty dire offering in terms of Happy Meals. It's totally devoid of any meaningful or fun content, but I guess at least that's in keeping with the movie itself. If only there were strips to say "The Emoji Movie makes me feel unmitigated despair".

The toys are rubbish too.