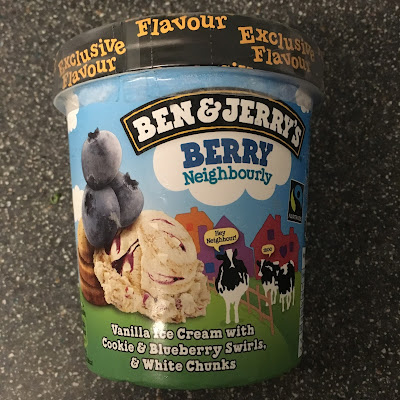 It's been a while since I've seen a new Ben & Jerry's flavour, so I almost missed this nestled among the others. But thankfully my keen eye spied it, a new exclusive variety for Tesco. Sofa So Good and Wholly Couch were some great additions, so could they make it a hat trick? Here we have Berry Neighbourly, which is an odd pun, but contains blueberry and cookie swirls in vanilla ice cream, with "white chunks". By this they mean white chocolate flavour chunks, and not white chocolate. But I wasn't going to dismiss them based on semantics, I had a tub of Ben & Jerry's to get through.

I'll start with the "white chunks", because although they're not technically chocolate, they're not bad. They're pretty plentiful, and are thick and relatively creamy. They're not the best quality, but they do remind me of the good old Baked Alaska polar bears. The blueberry and cookie swirls complement each other very nicely, a nice bold fruity swirl alongside some nice crunchy, crumbly cookie, similar in texture to a cheesecake base. Some of the swirls were quite clumped together, leaving other areas of the tub as more vanilla ice cream, but the white chunks still made it a good time. This isn't the perfect tub of ice cream, but the blueberry is authentic and makes for a great new addition to the Ben & Jerry's range. Well worth heading to Tesco for.