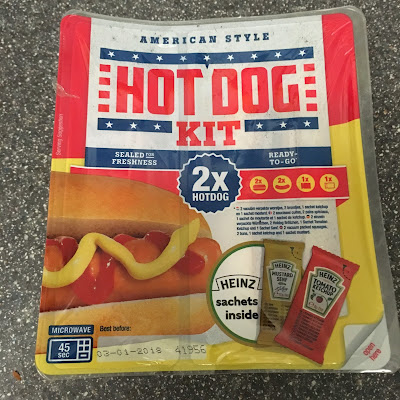 B&M has a fair amount of questionable food items lining its shelves (I have a particular tinned treat I'm trying to hold off experiencing). I thought I was out of the woods after the first couple of rows and yet, on the other side of the store from the food aisles I found that the fun wasn't over. Sitting amongst the Christmas decorations was a stand in the middle of the floor, boasting these hot dog kits. Now, I'm normally used to seeing hot dogs in the refrigerated sections, or packed into dubious cans elsewhere. But never before have I seen them in blister packs alongside buns and sachets of sauce. I guess this is one for all you budding survivalists to put in your bunker, as long as the apocalypse is going to happen in the next few months anyway. The instructions are simple. Snip the end off the hot dog packet, blitz them for 15 seconds, stick them in the buns and microwave for a further 30. There's no more convenient way to get your hot dog fix, but is it worth it? 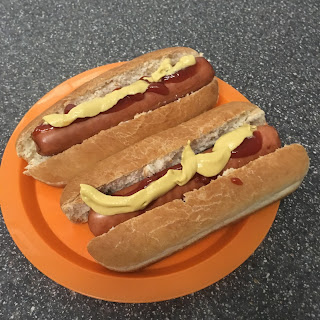 Here they are in all their glory(?) Notice that weathered look on the buns, like the dry, chapped and dusty hands of a manual labourer. I'm imagining they don't taste dissimilar either. The buns were so dry that one of them snapped as I attempted to put the hot dog in it. Once they were blitzed I suppose they weren't awful, but by no means is this nice bread. The hot dogs aren't great either, but at least they're not slop. There's some semblance of meat in there, and overall I'd say these are simply barely passable hot dogs, rather than the gastronomical punishment I was expecting. They're helped along by the nice little Heinz sachets too, to cover up the disappointment of what lies beneath. So if you're desperate for a hot dog and this is the only option, its not going to kill you. But it's not enjoyable either.