Today's Review: Hunger Breaks Mixed Grill In A Can 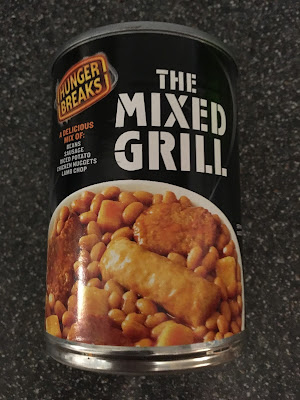 You may know that occasionally I'll hunt down the most abhorrent looking food I can find during a shop. Why do I do this to myself? Well, partly because it's nice to be able to warn you in case you were ever thinking of picking up such delights as this mixed grill in a can, and partly because it's nice to write about something that isn't "really good" or "pretty good". Sometimes it's just nice to tear something apart, because, let's face it, no one, not even those who made it, thought that this was a good idea. 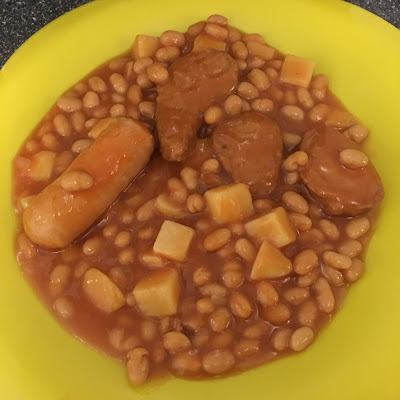 Just look at it! What even is that? Well, let me enlighten you. While the can clearly lies about it being a "delicious mix", it does assure me that the stuff on that plate is a combination of beans, diced potatoes, sausage, chicken nuggets and lamb chop. Yes, a lamb chop in a can, what a time to be alive. To be fair, the beans are alright, passable as far as beans go. The potatoes are just mushy and have a weird taste, and so does the meat to be honest. The chicken nuggets don't change in colour or consistency throughout, and taste how I imagine those meaty chunks in dog food taste. The sausage just sort of squidged apart in my mouth, it's hard to tell whether it's processed meat or water with a little bit of fat mixed in. The lamb chop was the most interesting, I was wondering how they got one into a can, but then I realised they did it by not making it resemble a lamb chop in any way. Dubious meat in a chicken dipper shape, with a vague yet horrifying hint of lamb-like flavour.

You may have gathered just from the title, but don't buy this. If you ever find yourself considering picking up a mixed grill in a can, I'm not sure anything can save you. This just provides solid evidence for the fact that if you're putting your meat in a tin, you're doing it wrong.