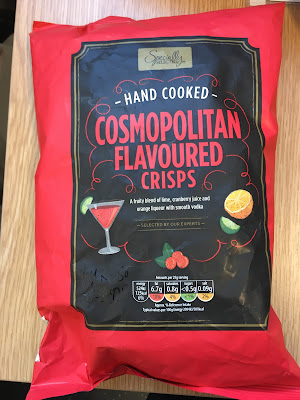 Alcohol flavoured crisps. You may not think that should be a thing, but over the years we've seen Guinness crisps, and Tesco's prosecco and rum flavoured attempts. Now it seems Aldi wants to throw their hat in the ring, and also crank it up to 11, with these crisps modelled after a classic cocktail. Because who doesn't want fruity alcohol potato chips?

The description sounded quite nice. "A fruity blend of lime, cranberry juice and orange liquer with smooth vodka". Then I realised that all that is in the form of a crisp, and I was at once disgusted and intrigued. Of course I picked them up, and of course I tried them, and, to be fair, they're not awful. Not good by any means, but as far as I imagined fruit and vodka crisps would be atrocious, these are actually edible. The vodka isn't particularly noticeable, the predominant flavours here are the cranberry and lime, with a little hint of orange. They're pretty authentically fruity, and I'd probably score them higher if they, you know, weren't used to flavour crisps. It's an odd combination, and certainly an acquired taste, but I'd say these are worth a try just for the experience. Maybe set up a bowl of them at your festive gatherings to bamboozle your guests.