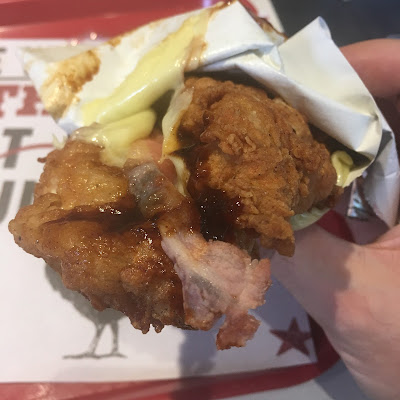 It's here, it's finally here! I know I said that yesterday about the dairy free Ben & Jerry's, but I'd only been waiting for that for a couple of months, whereas I've been longing for a double down for seven years. But now, the legendary "burger" has made its way to the UK, for all to enjoy (or vilify, depending on your stance). If you don't know what the Double Down is, and you didn't guess from that picture up there, let me enlighten you. It's a burger where the buns are replaced with chicken fillets. So we have two pieces of boneless Original Recipe chicken, in the middle of which resides cheese, bacon and BBQ sauce. You're either disgusted or drooling right now, so let's push on with the review.

For all the hype this received about being the height of disgraceful burger decadence, I don't see what all the fuss is about. KFC have brought out burgers containing two chicken fillets before, and this is essentially that but without the bun. Therefore it's healthier, less carbs, more protein, and a good amount of fat too. I was worried that after this long a wait I would be somewhat disappointed by the taste, but I have to say this does a pretty great job. The fillets are great, a nice chunky offering with that signature skin, and there's a good amount of cheese plastered inside. It seems to be a different kind of cheese, somewhat more authentic and creamier, and the addition of bacon really pulls it all together, it's a meaty, cheesy delight. On top of that is some amazing smoky BBQ sauce, making this a messy yet satisfying "burger". Maybe it was just the lack of bun that pulled the focus more to the meat, but this tasted different to any other KFC burger I've had. The Double Down has been a long time coming over here, and I'll be grabbing some more in the short six weeks that it's available. I suggest you do too.