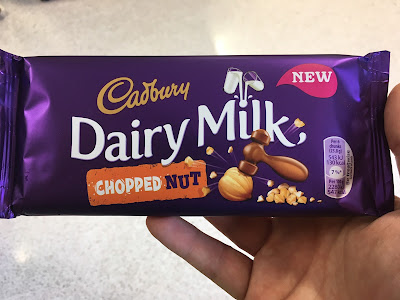 How do you like your nuts? If your answer wasn't "whole" you were out of luck as fair as Dairy Milk bars were concerned. But now there's another choice, in the form of this chopped nut bar. Following in the footsteps of the chopped fruit and nut that came out last year, this is pretty much the same, but without the fruit. But are whole nuts really that much of a problem? Or are Cadbury just chopping up their nuts so they can shove smaller pieces throughout a noticeably thinner bar of chocolate?

As you can see in the picture, I either have gigantic hands, or this bar is pretty small (hint: it's the latter). So yes, it's a small bar. But does the chopped nut give it an advantage? Let's ignore the fact that the packaging clearly shows the nut being delivered blunt force trauma via hammer rather than being chopped, and just say that no, it's not better. In fact, I think it suffers for it. The nut is spread throughout, sure, but the pieces are so small that the flavour isn't particularly noticeable. There's a slight nutty undertone, but it's mostly just chocolate with a bit of texture thrown in. At least with the whole nuts you get that definite hit of flavour, this one just has some crunchy bits that are nut-like. Still, the chocolate isn't bad, so it's not all for nothing. I just doubt I'll ever pick this up again.