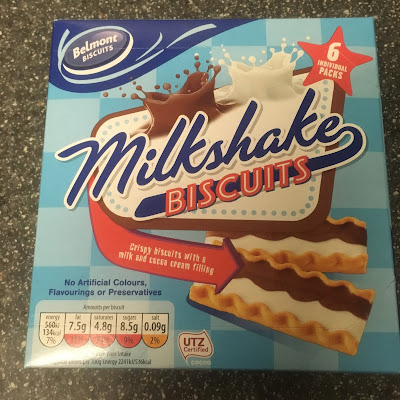 Enough of the ridiculous crisps, let's tackle something more on the normal side. I picked up these milkshake biscuits at Aldi the same day I grabbed the cosmopolitan crisps, and I'll be honest in that it was the word "milkshake" that dragged me in. I'm a sucker for a milkshake. They're basically biscuits covered with a milk and cocoa cream, and hey, as long as it's got milk, they can call it a milkshake, right?

I wouldn't say these remind me a whole lot of a milkshake, but that filling (topping?) has a nice creamy taste, with distinct cocoa and milk notes, and they work well together. Not quite a cream as it says on the box, and not quite chocolate either, something in between, and a good texture. Underneath is some pretty good shortbread biscuit. Not exactly your classic buttery goodness, but it's a nice crumbly biscuit with a good flavour. I didn't really know what to expect when I grabbed these, but they're actually some very nice biscuits. I'll be picking these up again.