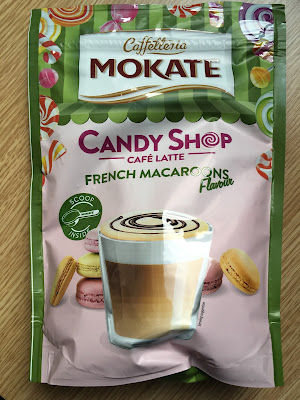 I'm sitting here bathing in the afterglow of my KFC Double Down review, and I figured I'd whip up a coffee with this interesting little bag of instant latte stuff I picked up in Poundworld. It tastes like French macaroons, apparently, although sipping it while writing up my last review, I'm not convinced. I normally write these things on the day they're posted, and I'm normally quite good at remembering how things tasted. But I thought I'd scribble this one down while the taste is still fresh on my tongue.

This stuff is horrible. I should probably have expected that from the fact that it pretty much consists of sugar and flavourings, but I figured it would at least taste a little bit nice. It's as if they've attempted to emulate some kind of nutty, coconut flavour, but run out of money and just gone with the first one they found. The result is a bitter, barely milky, disappointingly flat coffee drink that's neither tasty or refreshing. The after taste is bad, and the initial taste is worse. I would have said it's handy that it comes with its own scoop so you can measure out the powder, but I resent anything that actually encourages me to make up this drink. Vile stuff, don't waste your time.