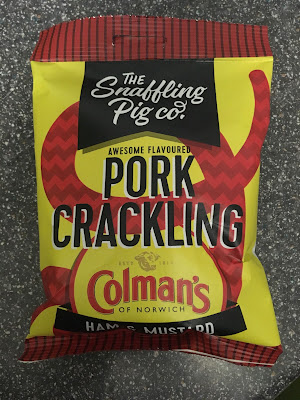 I've grown partial to a bit of pork crunch lately, although I'm still a bit on the fence with the whole pork scratching thing, they're a bit tooth-breakingly hard. Here we have a bag of pork crackling, which I guess sits somewhere in the middle of the scale. This one's a little different, it's flavoured with ham and Colman's mustard, which promised to give it a bit of spice, and some meatiness, instead of fattiness I suppose.

I thought I'd get on with this stuff, but the truth is it's pretty gross. It does exist in the realm between scratching and crunch, but not in a good way. Some parts of this stuff are solid, while others give way easily to a lump of cold grease. I'm not sure if those are pockets of flavour or what, but I couldn't really identify the mustard all that well, there was a bit of spice but it was overwhelmed by the moist fat pockets that seem to be spread throughout. Not a great bag at all, I think I'll stick to the more traditional stuff.