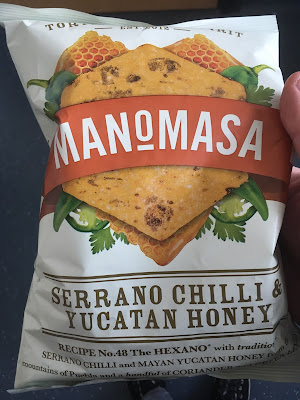 I've tried a couple of flavours of these Manomasa tortilla chips, but apparently I've yet to review any. That changes now, after I found this new and interesting sounding variety in Asda. The chilli is a regular flavour occurrence in chips, but honey is a new one to me. I was promised sweet and spicy, and hoping that these would deliver.

Despite saying Serrano chilli on the front, apparently these also contain Scotch Bonnets, which makes sense, because these are some very hot chips. I love a bit of spice, and often find myself disappointed with the level of heat, but these deliver, giving a tongue tingling burn that lasts for quite a while. In fact, while often I can't make out much chilli when it's mixed with other flavours, these ones had the opposite effect. The honey wasn't really there, just the intense heat, and it only came out as I made my way through a few chips. When it did though, it was a lovely sweet undertone that took the edge off the chilli, but there was enough to provide a lingering spice that really is satisfying (or horrific if you're not a chilli fan). Coupled with the great quality of the chips themselves, this is a great bag with a unique flavour, and one I'll be picking up again. It's a little off in the flavour balance, but if you're after a bit of heat these are the ones for you.