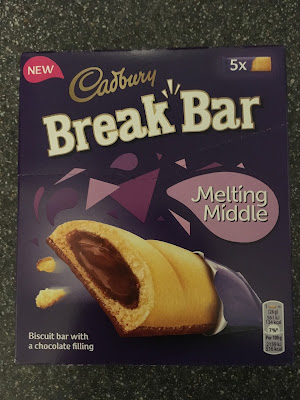 Not content with dominating the chocolate bar market, Cadbury have attempted to branch off into other snack food areas such as cookies, doughnuts and microwave puddings. Now it seems they've got their eyes set on those single serve breakfast bars, not that these are breakfast bars specifically, they're Break Bars. So I guess you can have them on your break. Basically, it's a biscuit bar with chocolate in the middle, and also on the bottom.

This is Cadbury we're talking about here, so the chocolate is good. The layer on the bottom is your standard Cadbury stuff, but the middle is something different. The box may says it's "melting middle", but it was clearly already melted by the time I bit into one of these bars. It's a smooth, creamy filling that almost has a chocolate-hazelnut taste to it, pretty good. If only the biscuit was as good, but alas, it is not. It's like they tried to make shortbread but didn't quite get it right. I'm not sure exactly what's wrong with it, it's a bit dry, the buttery flavour doesn't stretch far enough, I don't know, I guess it's a combination of things. But the biscuit isn't all that, and that's a large part of the bar. It's not awful, I'd just expect a lot more from Cadbury, especially since they've already proven they can do biscuit from the Snack shortcakes. All in all, it's pretty average. You might want to pick some up for your break at work, but you'd be better off picking up a multipack of chocolate bars. Unless there's some kind of stigma towards eating chocolate bars at your place of work, in which case, it's probably time to change your career.