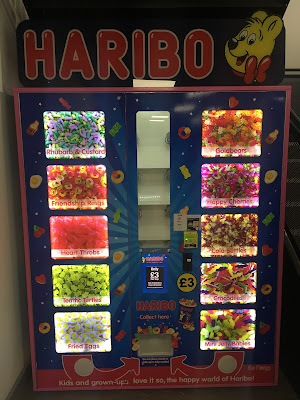 At the base of the stairs it called me. The sound of children's laughter, followed by that classic theme. "Kids and grown ups love it so, the happy world of Haribo." Yes! I'm a grown up, and I love it so! This monstrosity of a vending machine drew me in from the start, and I was sold when I saw what was on offer. It's a pick 'n' mix machine, whereby you pay £3, choose up to five sweets from the selection, and watch as tiny conveyor belts fill up the cup before your eyes. £3 was a little steep for a pick 'n' mix cup, but look at that selection! Terrific Turtles! Crocodiles! You can't get bags of them easily around here. Also, there were some rhubarb & custard flavoured pencil things that looked utterly amazing, so I tapped my phone and watched this thing go to work. Did I mention that it takes Apple Pay? This is truly the machine of the future.

At least it would be if it worked. You know those rhubarb & custard sweets I was aching for? Turns out that specific conveyor belt didn't work, so I only got the other four selection in my cup. Of course, I only knew this after I'd paid. My friend also got a cup, which was utterly devoid of jelly cherries due to a blockage, and his cup was only three quarters full at the end. It seems like this thing requires a lot of maintenance, the concept is good, but maybe it's just a bit too ridiculous to function.

Oh, and also the sweets are stale. It turns out leaving unwrapped Haribo sitting on conveyor belts in a not entirely airtight vending machine means they're not the freshest when they're eventually chosen to fall into a cardboard cup. I mean, I ate them, but they were very dry and firm. This is a flashy vending machine with a lot of flaws, designed to reel in kids and suckers. I was one of those suckers, but let this be a warning to the rest of you. Don't get drawn in by the happy music, just go and buy a bag of Starmix instead.