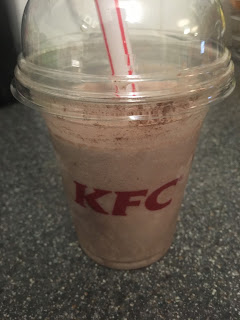 What's Christmas without a box of Celebrations? Awful, that's what. But think about those who have trouble chewing, what are they to do? Well, KFC has the answer, by introducing a new Krushem that has not one chocolate mixed into it, but five. It's like a box of Celebrations chucked into a milkshake. Featuring Galaxy, Galaxy Caramel, Maltesers, Mars and Twix, this is one I couldn't wait to get my hands on.

I'll start by saying that this is a bit of a mess. That doesn't make it bad, sometimes a bit of mess is a good thing. There's a lot going on in here, so many elements at work together that it's somewhat hard to differentiate. I mean, I don't shove one of each Celebration in my mouth at a time, and from tasting this Krushem I can see why. The shake itself is nice and chocolatey, with a hint of caramel, while the chunks are plentiful and varied. I never thought I'd say this, but I think there are too many pieces, I had to pause between every mouthful to chomp down on some fairly firm bits of chocolate, biscuit and whatever else came up through the straw. So yes, this isn't bad by any means, but it is very busy, and all the flavours that would be great on their own just kind of mix into one. So while it's a great idea on paper, the execution isn't fantastic. A good festive offering to try out while it's around though.