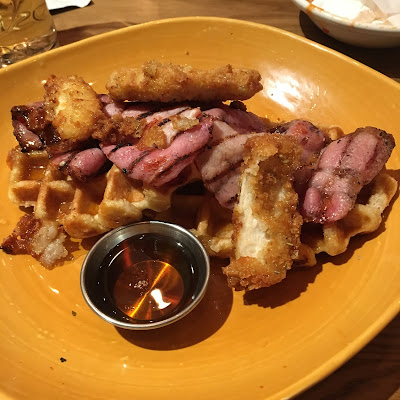 What do you want for lunch? If your answer is chicken and waffles, Harvester has you covered. Yes, this all American dish is nestled among the more standard offerings of the lunch menu, but of course I was drawn to it straight away. It's a decadent combination of sweet and savoury that I couldn't pass up, waffles with maple flavour syrup, topped with bacon and buttermilk fried chicken strips.

Now, I've had bacon and pancakes before, and I've also had piri piri chicken on a waffle, but this is an unholy combination of meat and sweet that I hadn't quite experienced. Despite what you may think upon hearing about this, it's not bad at all. The chicken and bacon were cooked well, a nice light crispy coating on the chicken, although the bacon was a little underdone, compared to the way the Americans eat it anyway. A decent sized portion of good meat though.

What's underneath, however, is not so perfect. The waffle has a nice sweetness to it, but is pretty dry, with the flavour falling flat at times. Thankfully the meat is there to help along with the flavour, and the syrup to help with the texture. It's a maple style syrup, definitely not the real thing, ans therefore a little too sweet at times. Still, it saves the waffle from being a total disaster, and it works well alongside the meat as well. This didn't exactly blow me away, but it's a decent enough attempt at something different. It doesn't quite capture that whole American experience, but it's worth a try. Jst don't expect the best.