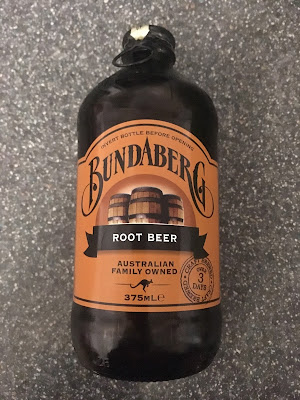 I've had my eye on this root beer for a while, it's been available in four packs in Tesco for ages, but never decreased from its £4.50 price point. Thankfully, they've started stocking single bottles now, which, while they're just under £2 each, was a more reasonable price to give this stuff a taste. This one's Australian, while most of the ones I've tried are American, I believe.

I believe the others are American because they're a lot more flavoursome, those artificial flavours and colours make a difference I suppose. Yes, this tastes like root beer, but it's quite subdued. It's more natural tasting, sure, and is something of a cleaner overall beverage, but it's lacking in the hit of flavour I'm used to with root beer. This stuff isn't bad by any means, it's refreshing, and that distinct TCP-like root beer taste is undeniable. But I'm not sure I'd choose this over the other brands I've tried. I'm in it for the bold taste, and this doesn't quite deliver.