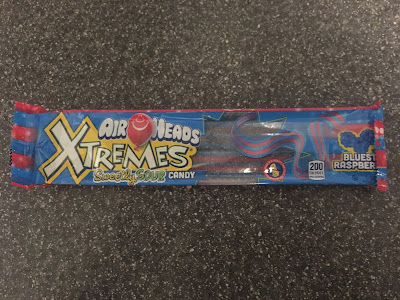 Air Heads are readily available in the UK now, but they come in more varieties than just the chewy dragees. These were sitting in the world food aisle at Sainsbury's, some sour belts with a "bluest raspberry" flavour, because just blue raspberry isn't enough apparently. Now, when something says "Xtreme" in big bold letters, I'm often left questioning its sourness by the end, and this is no exception. These things are not particularly sour, nor are they particularly blue raspberry. They're sweet, so that's one thing, but otherwise they're pretty bland flavour wise, and the sour element is fleeting at best. Disappointing, I think I'll stick with the regular chews from now on.