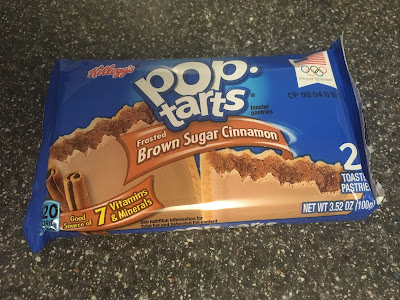 It's nice to find American Pop Tarts during random supermarket visits, I picked these up in a Co-Op I stopped off in to get some milk. To be fair, they sound and look pretty brown and unappealing, but my new found love for cinnamon drew me to these.

These are actually pretty damn good. They're pretty uniformly brown in colour, so they're not exactly the best looking, but the insides boast a sticky, slightly gritty sweet filling that has a darkly sweet taste. Like molasses, with a hint of cinnamon heat. It's not quite as decadent as the other colourful Pop Tarts varieties out there, but they're pretty tasty, with just the right amount of cinnamon. I'll be picking these up again (if I see them around.)