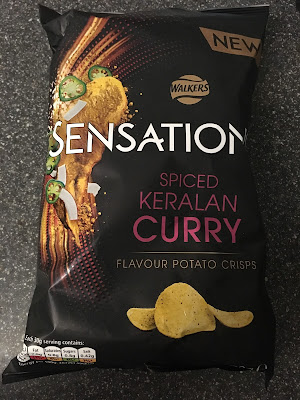 We don't get new Sensations flavours all the often, so it was nice to see a new one when I was walking around Tesco yesterday, this one is a spiced Keralan curry, with a nice mixture of coconut and chilli, incorporated with "curry flavour." Now, I can't say I've specifically tried a Keralan curry before, but the internet assures me it's a masala blend, and I have to say, these taste pretty good. There's a nice creamy curry flavour at the base, a lingering heat that isn't particularly strong, but does do the job of building up heat over time. The coconut is a nice addition, thankfully not too overwhelming, but I'd say it's the most predominant flavour in the pack. Still, everything works together very nicely, and this is pretty much a nice, creamy, coconut curry in crisp form. I'll be sure to pick some more of these up, hopefully they'll hang around.