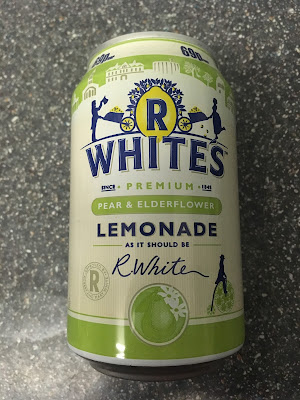 Pear lemonade. Pearonade? Nah, that doesn't roll off the tongue. But still, this is a thing. I picked it up in my newest local pound shop, the name of which escapes me right now, but I'm pretty sure it started with "Pound". This was less than a pound, before you go thinking it's some premium priced can of lemonade, but it's made by one of the most well renowned lemonade manufacturers, so I had faith that they were on to a good thing by introducing some pear into their lemonade.

This is lemonade that also tastes like pears, so I guess it does what it set out to do. I wouldn't say it's amazing, but it's a nice enough effort for a different kind of lemonade. The lemon itself is still at the core, so the pear flavour doesn't exactly win out, especially with the elderflower hanging around as well. The fruitiness isn't lost too much, but I would say that the pear and elderflower aren't exactly as strong as I'd hoped, this is pretty much a can of lemonade with a little bit of flavouring thrown in. I was a little disappointed, but this isn't a bad drink. Worth the much less than £1 I paid for it.