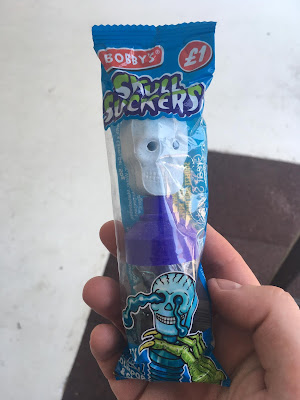 While "Bobby's Skull Suckers" sounds like the name of a macabre travelling circus, or a zombie survival experience, it is in fact the name of a lollipop I found nestled among those pocket money sweets in the Co-Op. It consists of a skull shaped lollipop, nestled on top of a concertina receptacle, which contains a blue raspberry flavoured sour liquid. So basically, sugar on top of a reservoir of sour sugar.

So basically, you press up the concertina tube at the bottom, which forces the sour goo up into the lollipop and out through its eyes. Eww, gross, right? Well, it's entertaining enough. One for those kids who like their confectionery grotesque. As for the taste, it's so so. The goop at the bottom has a little bit of a kick to it, but not all that much, though it does have a nice little blue raspberry flavour in it. It gets sickly pretty quickly, but luckily there's not really much there. While that may be good for not overwhelming you with sour syrup, it doesn't fare well for the relatively dry lollipop on top. It's like an off brand Double Lolly with a slight blue raspberry tinge, but it soon gives way to a featureless, dry, slightly powdery lollipop. A pretty gross offering, both in aesthetics and flavour, but I suppose it's not all bad.