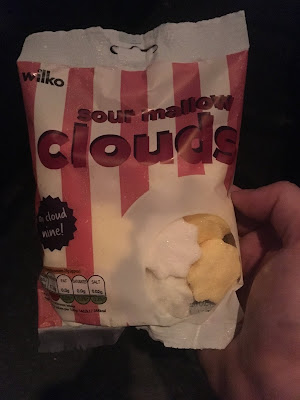 Here's a quick little review of these Sour Mallow Clouds I picked up at Wilko a few days back, I can't say I've tried too many sour marshmallows, so this bag really appealed to me. They come in a variety of colours, but it doesn't affect the flavour, so let's just say they're interesting shaped marshmallows with a sour coating. Despite my initial misgivings, I must say they're not too bad. The marshmallows themselves aren't the best quality, but they possess some of that nice fluffiness. The sour element is pulled off well, an initial hit from the coating, but the tang continues through the marshmallow itself, making these some nice chewy, tart mallows. A unique little bag among the other generic confectionery offerings, track them down.