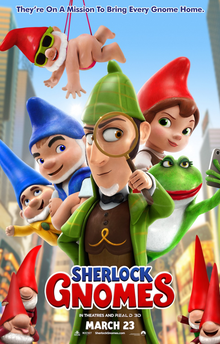 It's finally here, the sequel that no one asked for. Yes, it's time for Sherlock Gnomes, the follow up to the truly forgettable Gnomeo & Juliet that released seven years ago. Not content with making one gnome-pun titles movie, they had to go and make another, despite the fact that the brand recognition is pretty non-existent. Here we see the return of the titular gnomes from the first movie, as they team up with Sherlock Gnomes and... Gnome Watson (great job guys) to track down their missing friends.

You may have guessed from that opening paragraph that this is not exactly a good movie. I only went to see it in the first place because the kids wanted to go to the cinema and there was literally nothing else on in their age range. What I was presented with was a bland story, filled with bland characters and lazy writing. There's just nothing there. I didn't laugh once, which isn't a surprise, but I didn't see anything that the kids could have found funny, and I didn't hear a peep out of them. There's some good animation in there, but that's pretty much the only saving grace. I don't know how they got so many high profile actors involved in this, it's just devoid of fun and personality. I think it's safe to say I did not enjoy this movie.