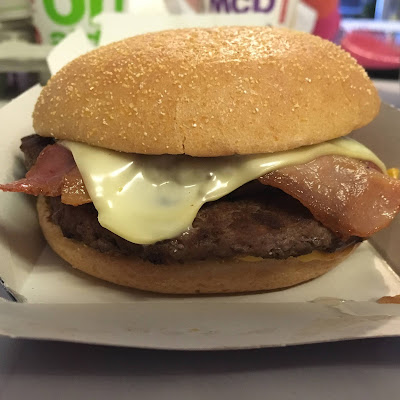 There's a new burger adorning the Great Tastes Of America menu, and it's a doozy. Here we have two beef patties, bacon, both American and emmental cheese, BBQ sauce, mayo and pickles, all wrapped up in a cornbread style bun. So yeah, there sure is a lot going on in this burger, but how does it... stack up? Har har.

There are a lot of elements to tackle here, and they're all pretty good. The double patty is a nice touch, the only thing better than one burger is two burgers. The bacon is plentiful and thick, adding another nice meaty layer, while the pickles provide a little hint of saltiness to round it off. Double the cheese means more gooey creaminess, and the two sauces are spread on nicely, meaning this definitely isn't a dry burger. But while all the ingredients are great on their own, there's just a bit too much going on when they're all put together. The sauces are a bit of an odd combination, and the American and emmental cheese seem to blend into one. It's not a big problem, everything together still makes for a fine burger, and the cornbread bun is a pretty unique and tasty addition. Definitely a better Great Tastes burger than some, so grab it while it's around.