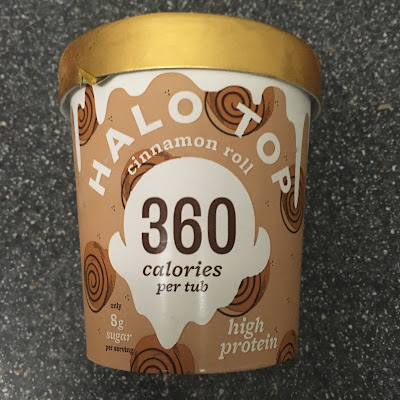 I just had to give some more of this Halo Top a try. After all, it's the only way I can eat an entire tub of ice cream and not feel guilty. Well, not too guilty anyway. Most of the flavours I wasn't overly fussed about, especially vanilla, but this one definitely caught my eye. Cinnamon rolls, in low calorie ice cream form! I have lamented the loss of the cinnamon buns Ben & Jerry's for a while, so I was hoping this would fill the void.

Well, there are no chunks in this tub, I'll get that out of the way first. I mean, I didn't expect any, but a few chunks of something would have really kicked it up a notch. As it is though, this is a nice creamy ice cream, with a sweet and slightly spicy kick of cinnamon. It leans a little too much on the cinnamon side, but the ice cream itself does a good job of emulating that cinnamon roll icing, and it all pulls together really well in the end. A warming tub of ice cream, if that makes sense. One for the cinnamon lovers.