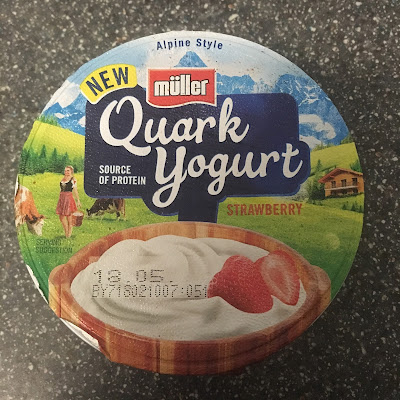 So now Müller have brought out a yogurt made with quark. That's quark, mind you, not quarks, everything is made up of quarks, but this yogurt is made with curdled, warm, strained sour milk. Yum. I've had a brief flirt with quark in the past, using it to make a sub-par cheesecake, so I can't say the idea of having it in a yogurt was particularly exciting. So I went for the strawberry instead of the plain, just so I'd at least get some flavour.

This isn't bad actually, I mean, it's not the best yogurt, but it's not an awful one. It's fairly thick, while still retaining some creaminess. The taste of the yogurt itself isn't particularly great, it's fairly bland, and I think the strawberry flavouring saves it from being worse. To be honest, I'm not sure why this exists, it's not catering to the specialist diet crowd, and all it's proclaiming is a source of protein, which yogurt is anyway. So yeah, a curious little pot. Not entirely necessary, if you fancy something different by all means give it a go, but don't expect to be blown away.