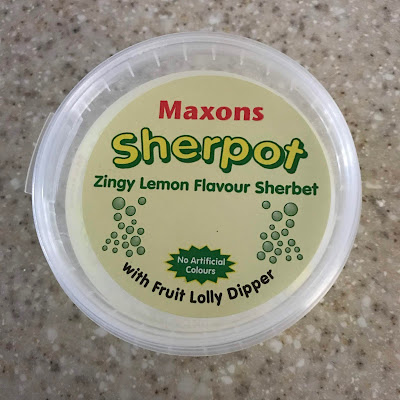 It's another Home Bargains sweet find, this one is a Sherpot, which is literally a pot of sherbet. It came in lemon or cola flavour, and I opted for the former so I could get that zing. Unfortunately I was just met with generic, flavourless sherbet. There may have been a hint of lemon somewhere, but it wasn't even that sour. I was starting to wonder if I'd gotten a pot off the wrong shipment, but those fears were dispelled once I didn't reach an intense high.

So yes, disappointing sherbet, but how are you going to eat it? Why, with the disappointing lolly of course! "Fruit" flavoured, though the fruit isn't specified, and isn't easy to make out. Also, I got two lollies on either end of one stick, bent into a sort of twin cherry shape, which was just odd and unwieldy. I had to twist the stick until it snapped in two, so I wasn't going at it like a confectionery based Darth Maul. As sherbet goes, this is probably the worst I've tried.