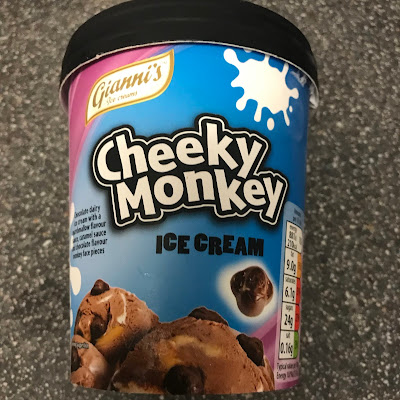 Anyone who reads my reviews is likely aware of my unwavering love for Ben & Jerry's, so I was excited when someone told me Aldi were offering something pretty similar for a smaller price. This appears to be the Aldi answer to Phish Food, but with pretty much the same name as Chunky Monkey, which was a little confusing. It consists of chocolate ice cream with marshmallow and caramel swirls, and little chocolate monkey faces. Aww.

Well, whoever told me this was just like Ben & Jerry's, they lied. I mean, it's not a bad tub of ice cream, it's supremely chocolatey, but the texture is somewhat moussey. The swirls and chocolate pieces are plentiful, it's just all the ingredients are a little off, clearly not the best quality. Definitely good for the price, but not quite a patch on Phish Food.