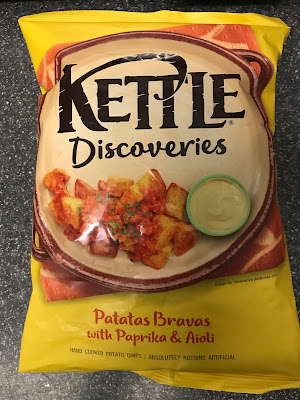 The next bold flavour that Kettle have decided to bestow upon their potato chips is... potato? Yes, potato flavoured potato chips, but not just any potatoes.Here we have the patatas bravas variety, which promises paprika and aioli. Not exactly the most ambitious flavour, but sometimes less is more.

Well, they got the potato part right, seeing as these things are mostly potato. So there's a good base there, upon which is piled a pretty nice combination of flavours. There's the smoky, slightly spicy hint of paprika, and an element of garlic chucked in for the aioli. The garlic does seem to hang around a bit more than anything else, so the balance is a little off there. These are better than I thought they'd be, but all in all they're still a bit bland. Potato flavour potato chips may be a safe bet, but they're not terribly exciting.