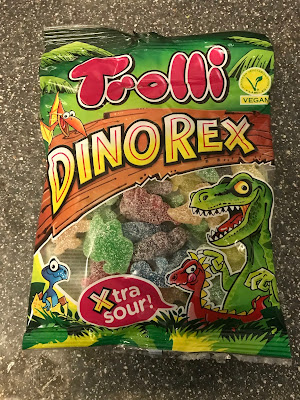 I should have known when I saw the packet, I shouldn't have believed it. But there it was, a bag of overly sugary dinosaur shaped sweets, with the blurb "Xtra sour!" I should have known that spelling "extra" like that was a ploy, and as such I was rewarded with sweets that were not extra sour, they were in fact just a little bit sour.

Alright, they're not all bad. The green and yellow ones aren't particularly flavoursome, but the blue, red and purple ones have a bit of a kick to them. They're a little tingly, sure, but by no means are they extra sour. All things considered they're pretty mediocre, definitely a few steps below Tangfastics. I don't think I'd get them again.