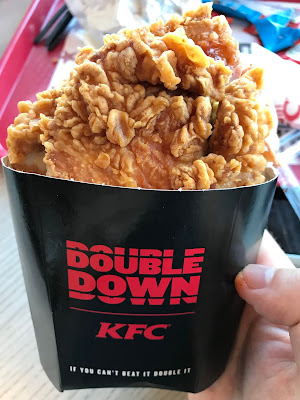 KFC were on quite a roll before their deliveries got all messed up. It's been a while, but they're finally starting to get back on form. First they reintroduced the Double Down, and now they've spiced it up a bit. Basically, it's the same as a Double Down, but with spicy fillets, and if you don't know what a Double Down is, you should get some real world education. A chicken burger with chicken instead of buns, and loaded up with bacon and cheese in between. This is a meaty, cheesy concoction that's every bit as good as the original Double Down, and the introduction of the Zinger fillets ramps it up, but not too much. There's a pleasant introduction of heat that left me with a satisfying spicy tingle for a while after. Let's hope the Double Down comes back around again soon, whether original or Zinger, it's a winner.