Well, my holiday is drawing to a close, and for some reason it's customary for my family to go out one day and eat a load of food at a nice restaurant. The last two times we've been to Oman we have visited the Al Bustan Palace for a Chinese meal, which is awesome. We went to the Al Bustan today too, but to visit the Al Karhan buffet restaurant. It's quite a sight when you enter the lobby. 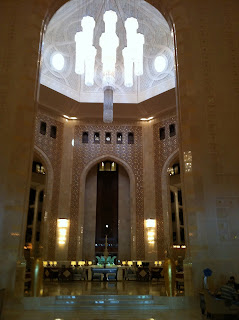 You can stand a 747 up in there apparently. Quite fancy and elaborate, so naturally I felt quite out of place. But no time to lose, there was eatin' to do. Once we got to the restaurant we were told it was full, and my heart sunk as I looked longingly at the chefs cooking up all kinds of delights through the window. But while we were hanging around outside thinking where else we could go we were ushered in and given a table. Awesome sauce. Let the eating commence. There was quite a bit of food... 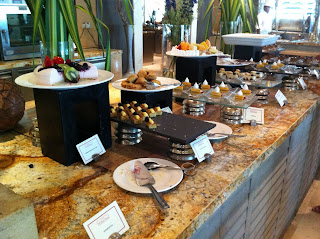 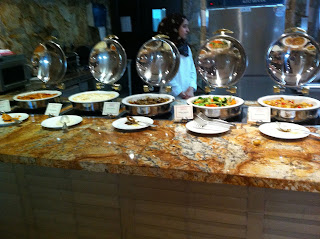 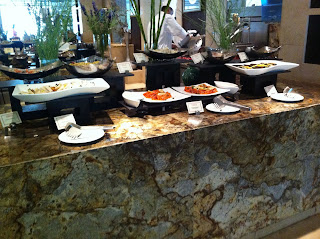 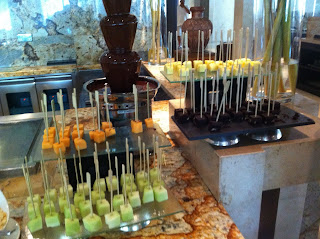 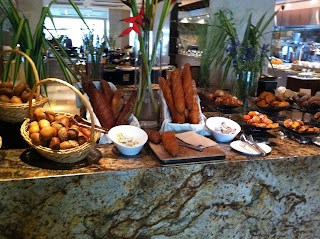 Okay, a lot of food. So much food that after my first main course plate I went back and had a second plate consisting entirely of seafood. Then two dessert plates because I'm greedy like that. But hey, gotta make your money's worth, right? My only regret is that I ate breakfast. Silly me. The chicken tikka was probably some of the best I've ever tasted, the beef was perfect, the sausage and bacon were delicious. Yes, finally, real bacon! They even had a separate counter devoted entirely to pork, kind of a "You like this crap? Well, here you go, it's in this cage", but who cares? It was a lot of pork.

I didn't want to fill up on bread, but I gladly would have. There were rolls, pain au chocolats, muffins, croissants, baguettes, it all looked so good. But alas, there was meat to be eaten, and mushrooms, salad, rice, a different kind of salad, steamed vegetables and more different kinds of salad. But after the awesome meat I consumed it was time to nom on desserts. I had fruit draped in fountain chocolate, two kinds of cheesecake, peach ice cream, strawberry tart, a chocolate brownie, jam doughnut, crème brûlée, cream caramel and some other things i can't remember due to gross sugar intake. Judge me all you want, but you weren't there man, you don't know what it was like.

Finally, I was full. So we went home again, not before taking some pictures of the amazing view outside. 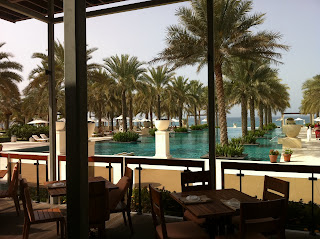 I would have jumped into that pool, but I had no swimwear and I'd probably have been arrested for using hotel facilities without paying. So we're back home now, but since most places open at 4 on the weekend we're off out shopping for a nice little end to the evening. Especially now my food has digested nicely. Best. Buffet. Ever.