Today's Review: The Large Amount Of Snails On The Pavement Tonight

It rained today. Quite a lot. I don't really like rain, because it is wet and likes to get you wet when you really don't want to be wet. I only got a little bit wet though, so it's not all bad. The rain had stopped by the time I walked home from work tonight. It was a perfectly normal walk home until I got to a road close to my place, when suddenly I was confronted with a shit ton of snails all over the place.

Okay, not quite a shit ton, but you know how it is when it's been raining, you'll see the odd snail or slug crawling out from the bushes and sliding all over the pavement. 'Cause rain is a dick to snails too, it floods their tunnels and makes them have to come up onto cold hard ground so they don't drown. It probably washes away all their little snail possessions too. Well, today must have been the Hurricane Katrina of snail flooding because I literally saw about 20 snails in the space of ten minutes.

"That's odd," I thought, "I have never seen this many snails after a rainy session. This is clearly a freak occurrence, therefore I must review it". So out came my camera, because pictures make things much more engaging and fun to read. 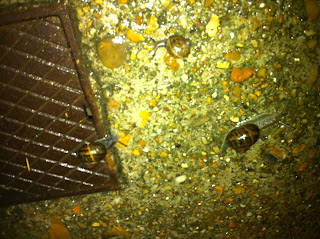 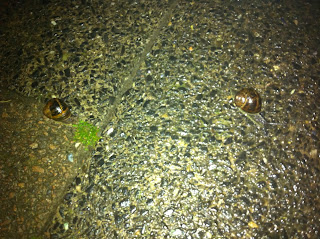 There is a picture of two snails, followed by another picture of two snails. I would've taken more pictures of the surrounding snails, but it was hard to pick them out on my phone screen when it was so dark, and while I took these two pictures someone walked past me. I looked up in time to see his puzzled expression, and immediately assumed he was thinking I was kneeling on the ground and taking pictures of dog shit or drain covers or something. I wanted to say "Oh, it's okay, I'm just taking pictures of snails so I can review them later" before I realised that would in no way make the situation any less awkward. So I decided to call it a day on the picture taking before I got a reputation as the guy who takes pictures of the ground at night.
Well, this is a review, right? I have yet to really state which side I am on. Do I love snails, or do I hate them? The answer to this lies in my childhood. I was about five or six at the time. I used to walk to school with a girl whose mother was friends with my mother. One day we decided to look for snails while walking. All of a sudden she said "There's one!" just in time to see me crush it underfoot. She wasn't very happy. One day she said she loved me and we became boyfriend and girlfriend, but the next day she told me she loved someone else instead and went off with my best friend. I believe this was a harsh lesson in having something you love be taken away within an instant.
So with so many snails on the pavement, I had to take extra care to avoid them all, as stepping on any would simply being back that painful memory which I can hardly remember. Damn you, snails, just set up a rescue shelter for when it rains, in the middle of the bushes or something. Just don't slither onto where I'm walking and make me stumble around while squinting at the ground.
My rating: 1/5
Posted by Dan Bishop at 15:49