I've had the Lord Of The Rings extended edition boxsets on DVD for a very long time. I watched the movies when I bought them, all 12 hours of them, and I always told myself I'd get round to watching the 26 hours of special features, but I never did. But now they are out on Blu-Ray, so of course I had to buy them again (but only 'cause I had some credit on my Blockbuster account, I wouldn't drop £50 out of the blue for it). There's no way I'll be watching everything this boxset has to offer anytime soon, but I can at least review the packaging. 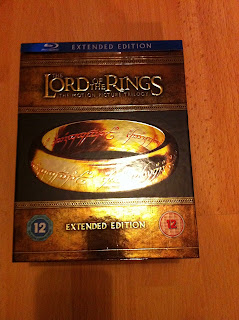 The box is immense. It pretty much reflects the immense amount of stuff that's packed into it. These films and the extras are probably the most lovingly put together set for fans I've ever seen. While the extended edition DVDs had two discs worth of features for each movie, the Blu-Rays have three, with an extra behind the scenes documentary on the last disc for your viewing pleasure. But let's get back to the box. It's very shiny, with a big picture of the ring on the front. It's very nice. It's made of sturdy stuff too, and it feels hefty and solid, which I like. There's a flimsy paper outer cover that tells everyone that these are actually pretty good films because here's a list of awards they won, but the cover stops you from opening the box, so that had to go. 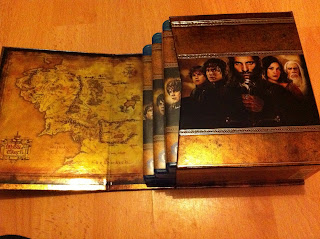 Inside is a nice map of Middle Earth, it's also shiny, and some pictures of the characters. The nicest thing to see is that the movies aren't all lumped together in one piece of packaging. Every one gets their own cool box, and each one has its own barcode on the back, presumably so you can sell one if you're a bit mental. The cover of the main box snaps shut with a little magnetic force, and the gilded patterns all over are slightly raised which really turns me on. But inside the Blu-Ray boxes themselves is where the magic happens. 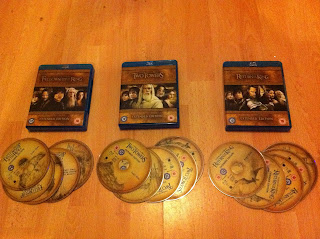 So. Many. Discs. I mentioned before that there are three extras discs per film, which of course means that the movies themselves are split over two discs each. Many people have said this is ridiculous as it's Blu-Ray and a Blu-Ray can hold loads, but they're just assholes. These movies are over four hours long each, and to put them all on one disc would severely hamper the video and sound quality you'd expect from Blu-Ray. Not to menton that each movie has about five different audio commentaries. The amount of stuff on these discs is absolutely immense, and it shows that it's a real labour of love from Peter Jackson. My only quibble with the discs themselves is that the special features discs are still only DVDs. But hey, my PS3 will upscale them, and I'm not sure I'd want to spend several hours counting the individual hairs on Jackson's straggly beard.
So there you have it. This boxset is magnificently put together, and while it's the Blu-Ray boxset of The Lord Of The Rings that should have been brought out first instead of the shitty theatrical one, it's good to see it finally come out, and in excellent packaging too. It does stand slightly higher than the other Blu-Rays on my shelf, which is annoying, but I like to think it's just commanding the respect it deserves. It's awesome looking.
My rating: 5/5