Yes, it's time for another KFC burger. This time though, they've done away with that no skin crap, and given us a different sauce instead. Yes, KFC aren't much for originality, I know, but when they added bacon and called it a Big Daddy I liked it a lot. 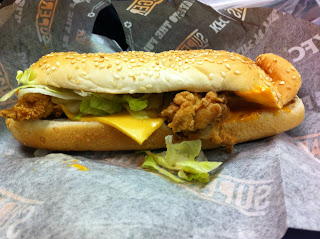 So here we have the Supercharger. Clearly not as nice looking as it is in the advertisements, but it'll do I suppose. This burger boasts two mini fillets in a "soft sub roll", with mayo and a "supercharged" sauce. They offer no hint as to what the sauce tastes like. Does it contain caffeine? Electricity? Is it designed to wake us up, or just give us a nasty shock?

Turns out it's spicy. It's a smooth kind of spicy sauce, it has a bit more kick than the normal hot sauce, so we can only assume that "supercharged" is one up on the KFC heat spectrum from "zinger". I guess the next step would be something like "awooga wooga". Anyway, it wasn't a bad sauce, but the fact that the only other ingredients are chicken, cheese and lettuce makes it fall a bit flat. Where's the towering option? I guess because they've opted for a sub to contain it in we can't go sticking hash browns in the middle, but it would be nice to have some bacon or something in there. In its defence though, the bread is quite nice. It is indeed soft, as they state, and I certainly preferred it to the normal KFC burger bun.

The Supercharger is a nice burger. It certainly doesn't overtake the Big Daddy in my esteem, but it's a good enough effort. Maybe if they added a bit more originality past the different sauce and bread they could be onto a real winner. But nice try.